Happy Friday!!!! It's time for another wrap-up hosted by Kris.

Our week went well. Not only did we get our school work done, we enjoyed some nice weather.
Bible
We studied Jesus entering Jerusalem this week. Mackenzie always enjoys this topic. She loves the idea of the people waving the palm branches as Jesus enters the city.

Math
She started multiple digit multiplication this week. The mere idea of it sent her into a tizzy, as usual. Then she actually watched the lesson and said that it was easy. Typical. LOL
Social Studies
It was a very emotional week in history for Mackenzie. Nathanial Bowditch continues to lose family members (Mackenzie has finally stopped counting LOL) and Eli Whitney continues to have a string of bad luck. But I think the kicker was what we learned while reading about the Sioux.


We have been studying Native American's all year with The American Indian Prayer Guide.
We learned how much the Sioux, and other tribes, relied on the buffalo. Mackenzie was really impressed with how they made use of just about every single part of it, including the dung. How they only killed what they needed to survive. We've also been learning a lot about the injustice that the various tribes have dealt with throughout history.


This week she was outraged to learn how the US government encouraged the white people to kill as many buffalo as they could in an attempt to push the tribes out of the Great Plains and onto the reservations. She was just so angry and a bit ashamed. One of the things I love best about our curriculum, Sonlight, is how it doesn't really sugar coat the truth about our history. It lays it out there for us and gives tons of opportunities for some great conversations. I think that it's not only enriched her education but our relationship as a family. And it's certainly helped make Mackenzie more compassionate.


A few weeks ago, I posted a funny picture of my husband with our Sonlight bill. Yes, it's generally rather large. =o) But my husband always says he'd pay double because it's worth every penny when she's able to make thoughtful comments and hold meaningful discussions about the things that she's learned. The good, the bad, and the ugly.

We also use Evan-Moor's Native American History Pockets and this week there was a pocket about the Sioux. Here is Mackenzie with a ceremonial "beaded anklet." Clearly, Mackenzie's is not made out of beads, nor would it fit on her ankle. (Our graph paper was rather large. LOL) But she enjoyed making it and liked the idea of using graph paper to make designs. 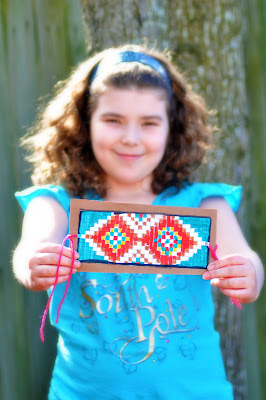 This week we finished our study on weather. One day we were talking about ways to harness weather into alternate forms of energy. We watched Mackenzie's pal Justin (oh how she loves Justin) make a wind machine and then we made our own.

We made a few adjustments of our own and then had a fun time testing it out. 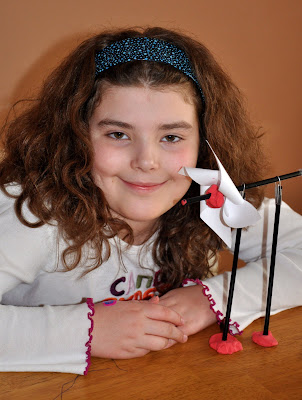 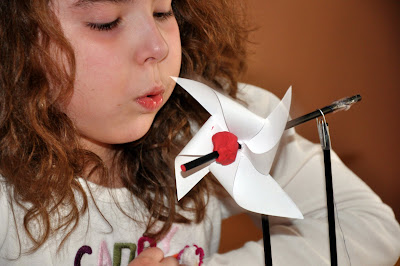 When were finished, Mackenzie wanted to make a video like Justin. She figured she could do just as well as he could. So here it is. And she especially wants Luke from Sonlight to watch it too. You'll understand why after you watch it. She had an ulterior motive. LOL

Maybe somebody could use a sidekick? So when she grows up she either wants to be a pop star, work at the Little Gym, or make videos for Sonlight. That's quite an interesting group of interests.

Great week! I like the ceremonial beaded ankle. She did a great job!

Busy busy as usual, huh? The bracelet was nice. Thanks for sharing.

Really like the beaded anklet - beautiful colors. How long did that take to color in?

Don't you love the Evan-Moor History Pockets? We used them a couple of years ago when we were studying the ancients. The girls really enjoyed the activities. You guys had a great week!

Making videos for Sonlight is a good gig, no doubt about it [smile].

While I can't get your great video onto any of our current DVDs, you could certainly add it to the Sonlight Facebook page so others can be inspired to create their own wind machine. That's one of the main reasons we started Discover & Do in the first place: We wanted to encourage families to do the science activities. I think your video would do just that!

Thanks for sharing [smile].

I don't know if Justin will make it to the Picnic, but I'll be there and will be around for the tours as well. If you're able to make it out, I do love meeting aspiring media producers [smile].

Keep up the great work!