Happy Friday fellow Wrap-Uppers. It's time for the Weekly Wrap-Up hosted by Kris over at Weird, Unsocialized Homeschoolers.

Our week was good! We accomplished everything we set out to accomplish and had some fun packages arrive. The only hitch was our fieldtrip was cancelled due to weather but we were okay with that. We went to Barnes and Nobles with a friend instead.

This week we talked about Jesus healing the demon possessed. We discussed how blessed we are to have Jesus in our hearts so that there are no room for demons there. Can you tell that someone was a little distressed at the thought of demons? =o)
Science

We are still studying weather. Our most interesting thing that we learned was that, at the poles, rainbows (or icebows) are not colorful. They're all white due to the extreme temperatures. Who knew?

We also read about how the rainbow is God's promise to us. Mackenzie decided to make a picture of a beautiful rainbow. 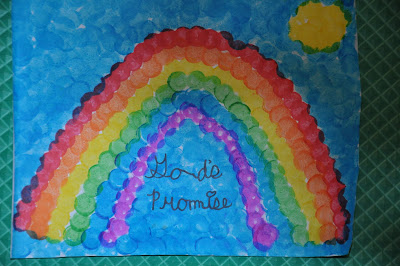 Math
This week we worked on skip counting by 8's in preparation for our x8's next week. We also talked a bit about measurement.


Language Arts
Mackenzie finished memorizing "The Bells" by Edgar Allen Poe. She LOVES that poem. LOL We also talked about conjuctions and commas in a series.

Social Studies
We read from a lot of sources this week...American Adventures, Meet Martha Washington, The Landmark History of the American People, and the Story of the USA vol. 2.

Our topics included: More about the Constitution and what's in it. A look at westward expansion, including how additional states are added, a more indepth look at George
and Martha Washington. Mackenzie was very sad at how inept George's "doctors" were at the end of his life. We also learned more about what "doctoring" was like back then from American Adventures. Mackenzie decided that she's glad that our doctors today know more about science and less about wives tales. LOL

We started Nathianial Bowditch as our read aloud. So far, so good. It's a true Sonlight pick, only 5 chapters in, and already our heartstrings are being picked.

In Brownies we are working on a census patch. Mackenzie was able to "wow" everyone with her knowledge of the census being in the Constitution. Especially when she said it was very important because "The American Revolution was fought because of 'taxation without representation' and the census makes sure that every state is fairly represented in Congress."

Bam!! Take that homeschooling nay-sayers. And I was happy because a) She is listening!! and b) She's making connections on her own, so she's understanding too.

Mackenzie did a little home ec and made some Fresh Orange Muffins. Yummy! She learned it at The Young Chef's Academy a few sessions ago. She's still got the touch. 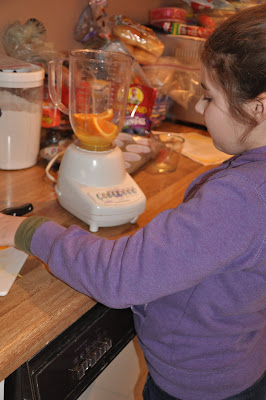 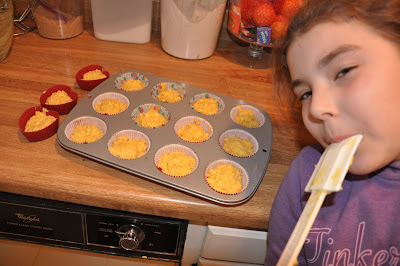 I forgot to take an after picture. LOL

And now the highlight of our week...

BOX DAY!! We received 2 and a half orders this week. 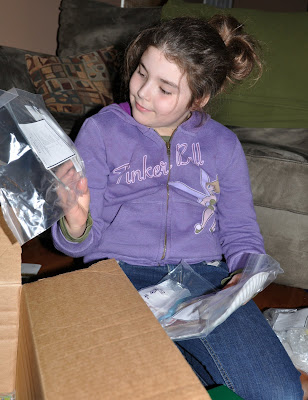 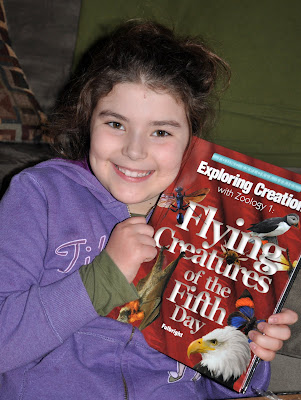 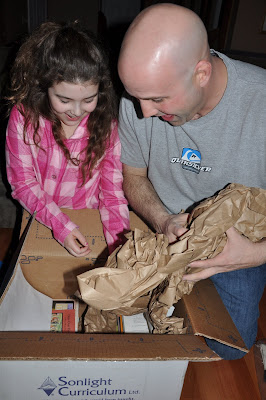 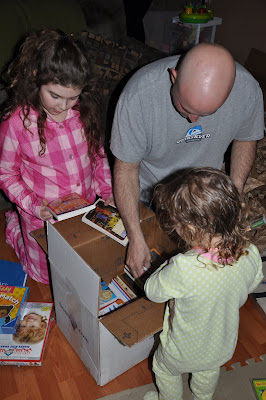 Even Daddy got something...the bill! LOL 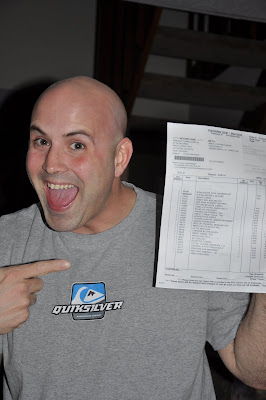 We also got half of our math curriculum. The student kit is on back order. =o( We're also waiting for geography, LA (except for the readers which we got from Sonlight), and a couple of fun extras.

Sounds like a great week! I love all the family pictures! Especially "Dad" with the bill! I got a good laugh out of that cause thats what its like at our house too! =0) Tell your dauighter her muffins looked YUMMY!

Love the picture of Kevin with the bill [laughing]. Good stuff.

I'm so jealous! I've got to clear some shelf space and order my Core...I hate when you do things before me!

I've been gearing up to start placing some orders as well! How exciting you've already got boxes! That picture of your husband is so funny! Sounds like a good week!

I love it when books arrive! Your daughter's rainbow is so cute and I really wish I could taste those orange muffins. Thanks for sharing your week!

Wow, looks like a great week! I learned something new, never heard of icebows before. Love the picture of your hubby holding the bill!

I am so PROUD of you and your daughter! Her statement about the census, well, it just plum educated me too!

Keep on keepin' on!

(Oh, and your hubby with the bill- HILARIOUS!)

Looks like a great week. Thanks for visiting my blog & checking out our week. My daughter did the Flying Creatures last year and had a lot of fun creating an awesome notebook.
Enjoy!

LOL Dad got the bill, he looks so proud! What a great week. I really love the idea of heading out when a field trip is cancelled. I would have stayed home and made everybody miserable by doing regular school :)

That rainbow surely looks beautiful. I really like getting packages too. Can't wait to place our orders. It won't be a few weeks though. I have been having fun searching curriculum though. Enjoy!

Looks like a good week! I learned stuff just from reading your blog! Icebows? Now I can't wait to do weather next year! And I love the excitement in opening the boxes. I will have to start doing that as we start getting ours in too (usually I just get excited myself, and then put them away!) 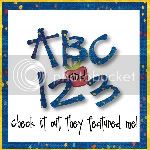