Tot School: The One Filled with Incidents of Various Natures

Tot School was sporadic this week.   It started with a social studies lesson on hospitals.

Kayleigh split her chin while walking in tights on our wood floors.  One more reason why I LOATHE wood floors.  (Except in the kitchen or dining areas where children don't generally play.)  At any rate, down she went.  I ran her to the neighbors first to see if I really needed to take her in.  Having a nurse and a police officer next door is sooo handy.  They thought she could use a stitch or two or maybe some glue.  So we went.  It was beyond busy.  Filled with people with fevers and pukies.  Just who I wanted to hang around with for 4 hours.  I happy to report that none of us came down with the "plague" from being in such close quarters.   And no stitches.  Just glue.  Which she peeled off about 68 hours later.  Typical Kayleigh.   And yes, I took photos of the ordeal.  It's for my Project Life and for my hubby who's in Germany.  Mostly for my Project Life. LO 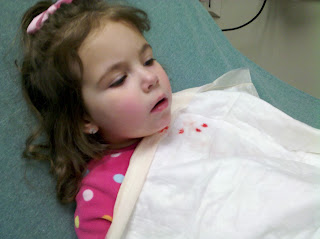 We had our cheer/basketball ice cream social because that's finally over.  Here's Kayleigh getting her medal for "playing"  with the Basketball Buddies.   By playing I mean avoiding basketball and hiding until it was time for snack. 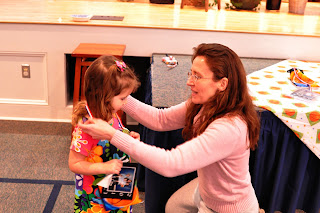 We did a few more L activities because she wanted to "teach" her baby. LOL   Baby learned about patterning using the ladybug activities from Confessions of a Homeschooler. 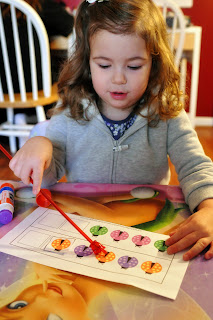 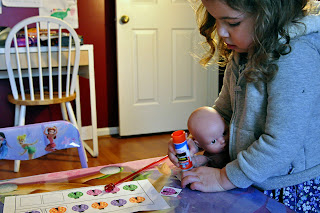 Baby also learned how to order ladybugs by size.  These were also from COAH.   If you haven't checked out her Letter of the Week program you should.  It's full of fabulous, hands-on activities to introduce letters.  And very adaptable for different ages and abilities.  It was worth every one of the 1,000 pennies that I paid.  And we'll be reusing everything for the next couple of years. 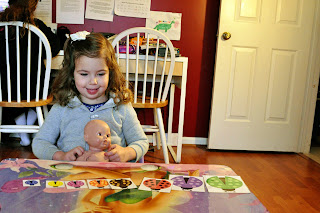 We also played The Ladybug Game

again.  It was created by a first grader.  She must be really smart. 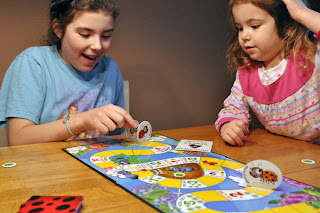 If I were the clever sort, I would've had her make her L page for her ABC book.  I'll add that to next week. LOL
We just got these Pop-Arty Beads

and they were a HUGE hit with both girls.  I got them mainly as a fine motor activity for Kayleigh but Mackenzie is nuts about them.  I didn't thing she'd be that into them. Kayleigh still struggles a bit with them but she likes them anyway. 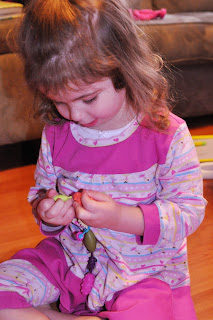 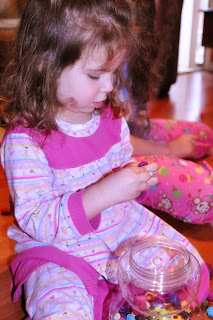 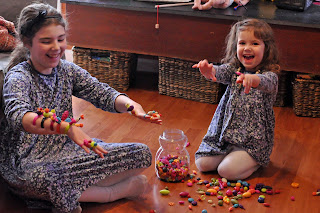 Eventually we moved on to Mm.  For one day anyhow.  All of these activities came from COAH.

We are not done with M.  Not only do we like working with letters that involve candy, COAH also has some cute monkey stuff that we want to try and I came up with a really cute book for her to make.  I'll share it with you next week.

We tried out Kayleigh's new Grasshopper Prep Kit: Getting Our Hands Ready

.   I've been eyeing it, not willing to pay the price, then I got a really good coupon to Barnes & Noble so I went for it.  I'm glad I did because she loves it.  This particular kit is meant for helping a child get ready for early writing and grasping.  Kayleigh has asked to use it every day. 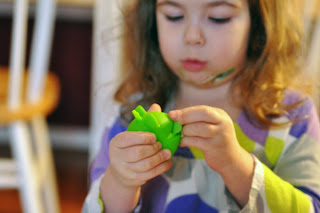 We rounded out our week with Mega Blocks

.  I wasn't allowed to build because I wanted to get her hair out of her face with a "pretty." 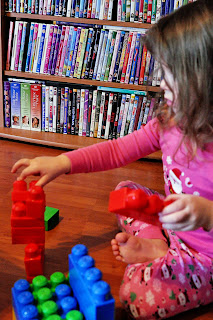 This last photo is the most important.  1)  It shows her sleeping during naptime.  She hasn't been very good about sleeping then.  She most plays and jumps and drives me crazy for the remainder of the day because she's exhausted.  2)  If you look closely at the rails and headboard, you'll notice white marks along edge.  Those are not decorative stripes.  Those are teeth marks.  Kayleighs.  No, I'm not kidding.   Sigh... 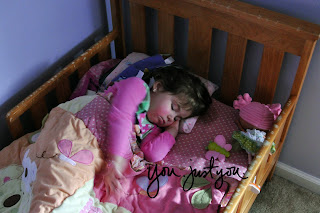 Be sure to click the Tot School button at the top of the page to see what the other tot's are gnawing  learning.
Posted by Stefanie at 4:15 PM

Owie! The rest of the week looked fun, hands-on and interesting though!

Absolutely love your activities. I am going to have to check out the Grasshopper kit!!

We have those same beads and both of my girls STILL love to play with them!

I love that she teaches her baby. My girl does the same:)

The ladybug activities and the grasshopper kit looks great for our Bug Theme next week. Thanks! :)

What a great week. I love how she is teaching her little baby. That's adorable. The M&M activities are a great idea.

It's so hard when our little ones get hurt. Glad she had some great care.

By the way, I shared a link to your blog in my Tot School post this week... thanks to you for the scissors idea.

Looks like you had a good week other than the injury! Poor girl! We have hardwood too and I'm nervous about how it's going to be for my 11 month old when he starts walking. Thanks for the reminder about the pop beads! I'd been wanting to get some but had forgotten about them!