that I'm saying this again. I'm serious, I CANNOT believe it. I could also go with Insane or Incredulous.  But here's how it goes...

As you might know, our oldest daughter, Mackenzie, was diagnosed with Type 1 Diabetes in September. It's been a major adjustment and it's effected every one in the house in one form or the other.

The small one, Kayleigh, has felt a little displaced over all of the attention, and gifts, plied on her big sis. She has on more than one occasion declared that when she gets diabetes she is going to get spoiled too. Watching her sister get pricked and shots for every meal has not once deterred her from this line of thinking. Not even after we tested her blood shortly after the diagnosis. (She was normal.)

So last Friday, Kayleigh was on on a one track snack train after dinner. She wanted snack, after, snack, after snack. We were trying to get stuff done at the times so she got away with it twice. When she asked for the third snack, I tuned back in and said no, you're done. She went on and on and on about that apple. So I told her that she could have the apple if she got her finger pricked first. I was thinking she's say no. Because who in their right mind would say yes to a needle in the finger over an apple? A Snickers, maybe. Well the little minx said "Okay Mommy!"  Grrrr...

So we tested her blood. And the results were surprising and unwanted. She registered at 331. That is very, very high for a diabetic and is not something that you should see in someone with a normal pancreas. Not even if they'd just eaten dinner and 2 snacks. Normal is generally between 70-150.

We were stunned. And torn about what to do. We didn't want to be the crazy, neurotic new d-parents and we didn't want to do nothing. Especially when our older daughter had it for over a year before we caught on.  So we texted our good friend, and life saver, Kristy for advice. Her little man was diagnosed back in July so she has more experience.

Kristy suggested waiting another hour and testing her again. So we went with that. Next thing you know, Kristy is at the house because she found the hour to be unbearably long too. About 75 minutes after the first test, we did it again. With better, but still sucky, results. 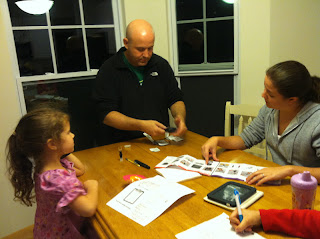 What to do, what to do?? Still not wanting to be the wack-a-doos, we decided to get an A1C test from the drugstore and check that. An A1C is basically a test that gives you your average blood sugar level from the last three months.  Kevin ran and picked one up and we figured out the instructions. She did come in within normal ranges but she was on the very high end of normal. So we were back to considering what to do.

In the end we decided to err on the side of caution and we called Mackenzie's endocrinologist. Boy was he surprised to learn that we weren't calling about Mackenzie. 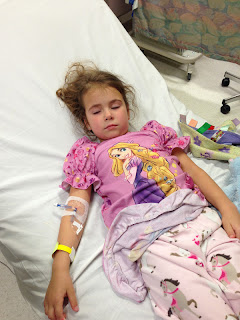 He debated a bit about what to tell us. He would've liked to have seen her directly but he can't unless she has a diagnosis. He didn't really want to send us to the ER on a Friday night (crazy town) because he knew that we'd be there forever and he was concerned about who would care for Mackenzie. (Isn't he the most awesome doctor ever?) Then he heard that Kristy was with us, her son is also his patient, and he said to bring her in.

Worst case, she gets a diagnosis and we come home. He wasn't going to admit her either way because her numbers weren't off the charts and because we already knew how to care for her and we had insulin in the house. Best case, she's fine.

So Kenzie went off for a sleepover with her little BDFF (best diabetes friend forever) and the rest of us headed to the hospital.

Thankfully, it hadn't gotten crazy yet. They got her into the triage area within 30 minutes and took all of her vitals. But didn't check her sugar yet. Which in hindsight, I should've had them do. Then we waited about another 30 minutes before getting a bed. And it was probably another 30 after that before she did get her blood sugar checked. 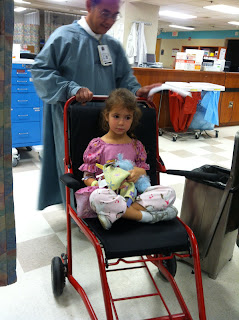 It was 141, which is a yay. Except that now they didn't have a record of her being high. But they ran all of the fancy blood and urine tests. Xrayed her for pneumonia. Talked a lot with Dr. Jensen. Kept us there forever. Typical ER stuff.

Around three a.m., they told us everything came back normal and that we could go home. Woot!!! But then they said that Dr. Jensen wanted us to call him tomorrow morning, no excuses. Sigh... I thought we'd got off to easy.

So like a good mom, I called the man back.

Me: "Who said I checked them?

He basically said that all of her tests came back normal but that he really didn't like the numbers she had at home, especially given how slowly Mack's D came on. So she is on what I call "D-Watch." We are to watch for symptoms like eating more (yes), urinating more (yes), sleeping more (yes). And we are too weigh her every week. Loses more than a pound a week, call him. More than 5 pounds in month, call him.  She was 39.5 when I weighed her that day. Kevin weighed her the week before, she loves the scale, and she was 42. But we did just get a new house and its huge and she loves to run around it. Over and over and over. All. Day. Long. 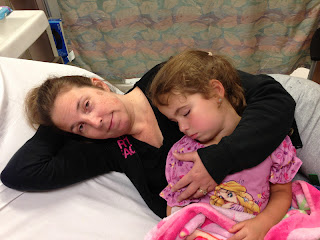 He also wants to do an A1C on their professional machine. We can't just bring her in because she doesn't have the diagnosis so we're to bring her to Mackenzie's next appointment and he'll do it then because it's right in their office.

We are only to check her sugars if we really, really, really think something is off.  Naturally, we've checked her twice since. Monday she was 425 right before dinner and 280 at 2 am. Normal the next morning. She was 280 on Halloween, just before we started feeding her candy. We didn't bother checking after.

I have to again say how much we LOVE this doctor.  Not once has he made us feel like neurotic, nutbuckets. Instead he listened,  is concerned, and is being proactive regarding her health.

So we sit here in limbo, waiting. Which, in my opinion, is a tad worse than the diagnosis.  My gut tells me that we're going to get another diagnosis in January, if not sooner. I'm praying that, for once, my gut is wrong. On the bright side, if she is Type 1, we shaved off at least a year on our "hey something's wrong with the kid" record.  =o)

Oh, your poor babies! I will be praying for them and for you. :(

Oh, my, gosh!!! Well, at least if it is (which it sounds like it), then you caught it even earlier. Sheesh! Two kids in one family. Well, at least you'll have the routine down already, and one you do to one, you can just do to the other! And then Kayleigh won't feel left out, LOL. Something tells me it won't be as much "fun" when it's for real, though. :( Poor babies! Praying for you all!

scary! I hope everything turns out alright. It's ok to be neurotic when it comes to your kid's health, right?!

I am just in shock! I'm curious if Type 1 is genetic? What are the chances that 2/2 kids would both have it? Praying that all is well with your girls!

I'm so sorry! What a roller coaster ride you've been on this weekend! I will pray for her.

I'm praying for you and for your precious little girls. I know the same frustrations of knowing something's "off" but not being able to prove a diagnosis. Hang in there! Your girls are lucky to have you taking such good care of them.

Oh, wow! :( That's really crazy! But I guess on the up side...you know what to look for and how to treat it!

Stefanie, not sure I missed this before now...any change? Praying for your family!!