If you don't already know it, I am not a huge fan of the winter promise curriculum.  The company itself or the crappy product that they peddle.


1) The crappy customer service. It's the worst. It took 5 months to get my (incomplete) order. FIVE MONTHS. Really. And I never received confirmation of what I would be receiving. When it would be shipping. Not even a packing list. I never did get everything.  You can read about my thoughts as it happened.

2) The material that I used, children around the world, was a complete pile of junk.  The maps were incorrect. All the freaking time. The IG was a complete and utter mess. Page numbers wrong time and time again for starters.  The notebooking pages were crap. Several of the books published by them were filled spelling and grammar errors. I could go on and on with specifics. But I'm not going to now because I already did.  Click the link and see all the horrible mistakes I found during the five weeks that I used the program. The link will show the posts starting with the most recent so you might want to click to the start of it all.

3) The return policy is a JOKE.  Please read this carefully and note the part I highlighted. 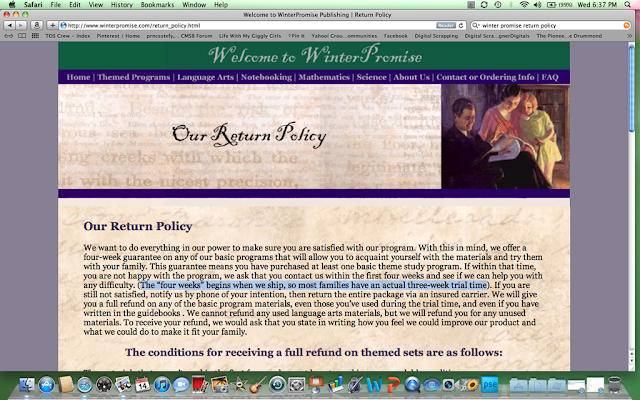 Basically, three weeks after I got the stickers and one book, my chance to return this crap was over. You know, since it took another 5 months to get the rest.

4) They know their product is junk and they don't care.  I talked with the owner on several occasions. I went into explicit detail about the errors that I found. On one product, the $30 book filled with spelling and grammar errors, he owned up to. Sort of. They knew it was like that but sold it anyway without alerting the customer. The rest he played dumb about.

Which makes him a liar because I researched their message boards and found post after post showing people complaining about the very issues I spoke of. People had been posting about it for years.  His responses were less then satisfactory and an embarrassment to his company.

Please be sure to click the links so that you know what you're getting into when you purchase from them. We lost thousands of dollars to this company. We're blessed that it didn't break us, but not every one is in the same financial position as we are.

So Why am I Bringing this up Again?


First and foremost, because I'm very passionate about making sure that other people don't get ripped off by them the way that I was.

Secondly, they're still trying to rip you off.  Last year they started venturing in the world of e-books. I thought that was an interesting tactic. I figured at the very list it would be easier for them to correct errors and stop sending people the error riddled physical books. At least with an e-book they could correct the error and send you a new link or something.

My bad for giving them the benefit of the doubt again. I don't know whether or not they would update an error because no way in heck am I giving them a dime of my money again. But here's what I do know.

They will charge you shipping on your e-book!!!!!  That's right they are making their customers pay shipping on something that they can email. Holy Creep of the Year Batman!!!  Who does that?

In an effort to be fair and not take somebody's word on this fact. I loaded up my cart with an e-book. I'll let my e-cart do the talking. 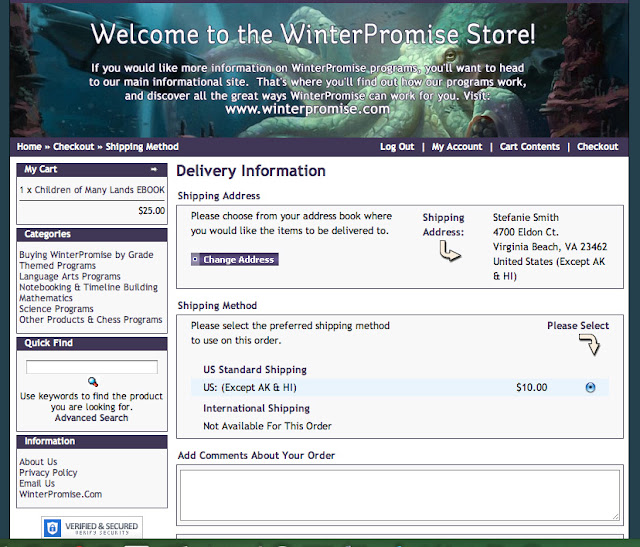 And now you've been warned.

Winter Promise is ridiculous! I might have to email Don and ask him if that shipping charge some kind of mistake....just for fun.

So agree ... worst purchase I ever made! I did not even attempt to sell it in the used curriculum sale - I just trashed it.

I'm so glad you shared your experience. I have been looking at their curriculum packages and wishing I could afford them. So glad now that I didn't waste my money!

Thanks for this review! I was looking at their curriculum but hesitant because of the price being high. We can afford it, but I like to read reviews before I buy something so pricey! I'm so glad I found this review! But I'm also disappointed, because I really wanting this curriculum to be good. haha

I have been hearing about all of these negative experiences families have had with the Winter Promise curriculum, customer service and shipping. I sort of feel bad because all of my experiences with the company have been positive. We have used all of their younger aged packages through Adventures in Sea & Sky since 2008, (plan to order Quest for the Middle Ages) and have not had any of the issues stated. Have only had to wait up to two weeks for delivery on all packages except one or two books that only took another week or two, and have not noticed more than a couple of errors in any of the books or guides....which is normal for any curriculum company. Also the customer service we have received has been exceptional. As for the ebooks and shipping charge. The charge that shows will not be there at the end of the transaction....you will not actually be charged the shipping for an all ebooks order. It is just the way their website is set up and they know about it, but it's the way it is because of who they have working on their website. Any way, not trying to under mind the negative statements about Winterpromise. Just want to give another experience/opinion. And, I have not exclusively used WP. We have used Sonlight, MFW, HOD, SCM, LBC and lots of other Curriculum over the years. We just keep going back to WP because it seems to be a good combination and works well with all the different learning styles of our children.

I really like your site and value your opinions but I have to say that I have not had as bad of an experience with WP as you did. TBH when ordering the curriculum I bought all e-books because I am impatient, and aside from having to wait 3 days for them to email them that part was harmless. The files they sent for some reason did not print correctly so I called the company and they refunded all my printing costs the same day. Then they shipped me hard copies of every book that I had a problem with and sent 4 copies of each because I have triplet forth graders and a sixth grader at no extra cost AND overnight. Then they went even farther as to send me new links that were not password protected so that I could easily get into the curriculum since I had such a problem with the first files. I was a little annoyed at the problem but overwhelmingly happy with the solution. So although, yes, they have a few grammar errors that I have found, and yes, it is a bit expensive, I am happy. I will admit that I only purchased the Sea and Sky package,and the 4th and 6th grade language arts curriculum. All the extra books were easily found on Amazon for a cheaper price, as an audio book on Audible, or at a library for free. I am happy I purchased this curriculum. The curriculum was around $500 and the extras added up to another $100 or so. It was not the cheapest option, but, it was the best option for a mom who still works full time and needed an organized solution to getting everything done. The kids love the curriculum and I plan on using it again next year. I am glad that I saw this after I purchased my books because my experience was totally different.

WOW! THANK YOU FOR THIS HONEST review! I just discovered this company and was starting to put time in to learning more, but I won't waste my TIME or Money on them! I appreciate this so much!