U is for... Understand 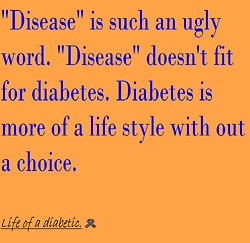 Diabetes is a complicated, confusing diesease. Most people don't know anything about it until they have too. I know I sure didn't have a clue.

I have family member nearby with type 2, and that had been my only experience with diabetes "up close." I do/did have some other family members with it but I was young and didn't realize. Then this past July, type 1 diabetes jumped into my world. My good friend's sweet, precious toddler was diagnosed with it. I quickly learned that type 1 is nothing like my limited experiences with type 2. I would pick my friends brain about his care and it kind of made sense but not exactly.

2 months later it made more sense. My Mackenzie was diagnosed this past September and having to deal with it full time, it suddenly made a lot more sense.  After my little Kayleigh was diagnosed, everything I thought that I knew about diabetes was proven wrong because, as we in the D-World like to say, "Your diabetes may vary." That is a huge understatement. It's ugly and unpredictable and nothing like type 2 diabetes, which is ugly in a totally different way. 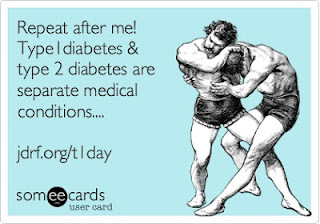 Since type 1 diabetes is not as common as type 2, people often make assumptions about my daughters based on what they know to be true of type 2.  Please understand that they are not the same disease at all.

So the purpose of this post is to give you an understanding of the similarities and differences of these two deadly diseases.

What They Do Have In Common


Diabetes, in general, is a metabolism disorder. Metabolism refers to how your body breaks down food for energy and growth. The majority of the food we eat is broken down into glucose, a type of sugar in the blood. Glucose is the main source of energy for our bodies.

The glucose in our blood is used for energy in our cells. Insulin is necessary to get the glucose into our cells. It is a hormone produced in your pancreas. You can think of insulin as a bridge. If the bridge isn't there, nothing can cross over. You won't be getting any energy to your cells.

Eventually the glucose builds up in your blood stream until the levels are too high, resulting in hyperglycemia.

There are 2 main reasons why this occurs. 1) Your body does not produce insulin. (type 1)  2) Your cells  do not respond properly to the insulin.  (type 2) 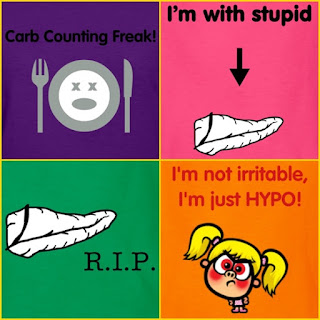 Basically, my daughter's own bodies are destroying the insulin-producing beta cells in their pancreas. They are not producing insulin. It had nothing to do with their weight, what they ate, how much they ate, how active they were. Their body's own immune system destroyed the cells. There was nothing we could've done to prevent it.  The beta cells in the pancreas have been destroyed and there is no way to reverse it.

When you are a type 1 diabetic, you are insulin dependent. For the rest of your life. Insulin is not a cure. It does not "heal" the pancreas. It is necessary in order to stay alive. Without insulin, cells cannot absorb the sugar that they need to produce energy.  Without insulin, the food that my daughter's eat to stay alive would eventually kill them.

Until there's a cure, there's not much we can do other than manage it the best we can. There is no controlling type one diabetes. It's too unpredictable. It's a difficult sort of life that I'm not capable of explaining. I just don't have the words. Thankfully a fellow D-Mom, over at The Princess & the Pump, has done a fabulous job of giving people a glimpse of what it's like living with type 1.  Check out "There is Something You Should Know" or "Do You Know How Lucky You Are?" for a peek at life with D. 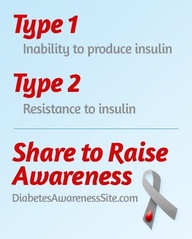 There are many reasons that can lead to insulin resistance: genetics, obesity, increasing age, or having high blood sugar for long periods of time. The problem is the cells themselves. They build up a resistance to the insulin and nobody is sure why. So the cells reject the insulin, which causes the pancreas to send out more to get the energy where it needs to be, thus causing the cell to be more resistant. Kind of like a vaccine or an allergy shot that's given to build up your immunity to the "whatever."  It's a vicious circle.  And how rotten is that?

Type 2 can be treated, prevented, or delayed by maintaining a healthy lifestyle. Physical activity and good food choices can go a long way to avoiding this horrible disease. Other treatments include oral medications or insulin injections.

The other rotten thing about type 2 is that there might not be any symptoms. People often die from complications of type 2 without ever knowing that they have it. This is part of the reason why it's known as "the silent killer."

Type 2 diabetes is most common in those over 40, but it's becoming more and more common in children. Maybe a side effect to the "video game era" we live in? 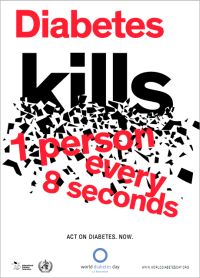 While the two diseases are vastly different, neither one is a walk in the park. They are both deadly.  Despite all of the medical advances in treatments, diabetes still remains the leading cause of blindness and kidney disease. It also puts you at a great risk for heart disease, stroke, and foot/leg amputations.  In one year, more people die from diabetes and the accompanying complications than from breast cancer and AIDS combined. Yet few people are aware of what diabetes is nor do they understand the seriousness of the disease or recognize the symptoms.

It is my prayer that you will share what you have learned about diabetes with somebody you know. It might just be that certain someone who needed to hear it most.

I can only relate because I had the third type, gestational diabetes. Meanwhile, I have a homeschooling friend who has a trained dog to detect her daughters highs and lows.

I am learning a lot from these postings. Thank you for sharing.

I have never realized these differences! Great informative post, Stefanie. You're a great mama for getting this figured out for your kids' sake!

Thank you so much for clarifying that for me! I never understood the difference between the two and both of my parents have it! They are both type 2 and yes I am working diligently to avoid it but I kind of thought type 1 was unavoidable, but I never understood why, until now. Thanks so very much. I am sharing this on Facebook so others can learn too. Great post!