This week we finished up with the letter E. Life, as usual, got in the way of some of our plans but we’re getting used to that.

We sorted small, medium, and large elephants. She did fabulous with this. She’s really got this down. She likes to pretend that it’s “daddy, mommy, and baby and they need to go to their wooms.”

We might be ready to start ordering things by size. You can download the sorting elephants if you’d like. I printed out three copies and laminated them. 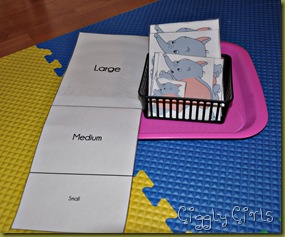 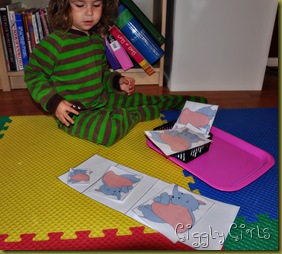 We also played our Feed the Elephant Counting Game again but I didn’t take any pictures this time.

We played with our Lauri Toys Number Play puzzles. We just worked with numbers 1-5. She can count to 14 (can you guess how many stairs we have in our house? LOL) but we’re working on recognition of 1-5 and she has really grasped counting things yet. Unless she has and isn’t ‘fessing up.

She’s really enjoys pounding in the pieces with a toy hammer. (Thanks for that idea Carisa!) And she even helped me put them in numerical order.

I wanted to start her sorting things by attributes besides size, shape, and color so I made this “science” sorting game. We sorted by whether the creature flew through the air or swam in the see. We’ve been going to the aquarium a lot lately and big Sis is studying birds at the moment so I thought she could do some “science” too. You can download it HERE, if you’d like.

She did a great job until we got to the lady bug. She wanted her to swim. Even though we released ladybugs and she’s knows first hand that they fly. LOL 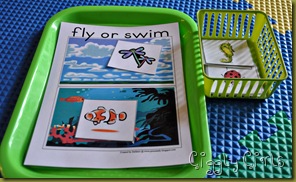 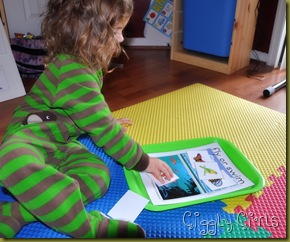 We did a spooning activity with our autumn gems and pumpkin ice tray. She usually loves doing this but this week she mostly wanted to stir the gems with the spoon. LOL She’s been like that since our ice cream shoppe sensory bin. 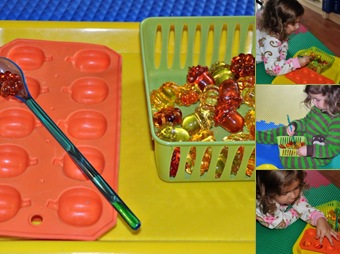 We made our E is for Egg page for our ABC book. Originally we were going to turn the E into an elephant but time got away from me and this was just easier. She loves to glue so she was quite happy to glue the little eggs on the E. 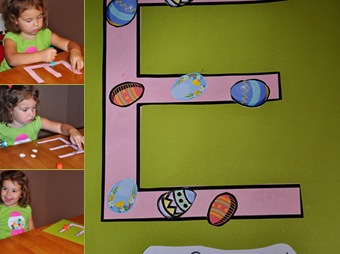 We also read about Esther in our Story Bible

. She made a Queen Esther crown. Which I did not photograph. I just cut out a crown shape, glued it on construction paper, and let her glue on foam shapes.

We played with our Hide'Em & Find 'Em Eggs which is always a big hit. No pictures though.

Since we did a lot with eggs for the letter E, our nursery rhyme for the week was Humpty Dumpty. This is the first one she hasn’t really taken too. Oh well, we put the printable in our “Song Book” and maybe she’ll like it in the future.

Our morning routine is hit or miss. Some days she’s all about it and other days it’s a bust. One day I’ll try and blog about it. LOL

Baby Gym went great. She always loves it there. Soccer Tots was a little better. She kicked the ball three times before she “quit.” Progress. LOL

Lastly, she tried out her new Trike. The poor, deprived girl has never been on a bike before.

We were at the park with friends and one mom brought her tot’s bike and I realized that Kayleigh had never ridden one before. Daddy met us up there and apparently Kayleigh showed him her buddy’s bike with some longing in her voice. So now she has a bike. LOL Daddy’s easy.

She can peddle when she doesn’t think about it but sometimes she tries to peddle both feet at the same time and gets frustrated. We’ll be working on that skill. 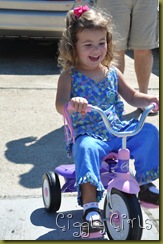 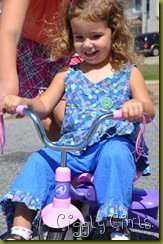 aww looks like a great week:o) Love the smiles on her bike:))) now following!

I love the fly or swim activity!

Our Family for His Glory said...

She looks so happy riding her new trike! :) What a great week!
Jessica

I really like the water or air sorting game; we'll have to try it out!

My son would just love your elephant activity! That is a great idea that I haven't introduced yet, sorting by size. Looks like a fun week!

Looks like a fun week! The pumpkin ice tray is so cute, where did you find that?

Nudgie is just starting on the tricycle now too. She's still just a tad too short for the pedals yet, but she's grasping the concept!

I loved your swim/fly activity! I'm going to tuck that one away for future use! Thanks for sharing!

Have a great week!

Loving the Fly or Swim activity!

Thanks for the printables. And I need to get my little one a trike, too. Just haven't gotten around to it yet...or more realistically, I haven't found one at a garage sale yet!

What a great week!! We also have the pumpkin ice cube tray! I just got it :)

And thanks for the info on live writer. I am trying it out for the 1st time right now.

And my DD has never been on a bike before either!

Since I'm the mom that brought her kid's tricycle to the park, I have to say YAY! So glad she got a tricycle. She looks like she's loving it! :) Now Kayleigh and Holden can ride around together at the park (when we're not at Busch Gardens, that is! LOL).

Love your fun activities! Thanks for sharing- my son will love them!

I love the Mommy, daddy, baby going to their "wooms"! Any group of three things (animals, people, cars!) become mommy, daddy, and my son too. Sounds like you fit a lot into the week!